In 2017, Cloudscape comics produced it’s second round of posters in the Comics In Transit series. These posters sought to explore the Canadian refugee experience and were written and drawn by BC comic artists in collaboration with Canadian refugee partners.

In 2015, Cloudscape organized a wide variety of local artists to create one-page comics that were then displayed in bus shelters all over Metro Vancouver. Here are all the Comics in Transit, each one featuring people interacting with cities all over the world.

We brought a lot of people together, both experienced artists and those just starting, to do a “Comic Jam.” That’s where a person draws one panel of a comic, he passes it to the next person to draw the next panel, and so on until the comic is complete. Take a look at all the crazy stuff that was produced.

As part of Cloudscape’s 2013 fundraiser for our seventh anthology, Waterlogged – Tales of the Seventh Sea, we encouraged Cloudscape members to draw a variety of sea monsters. Here’s what they created for us.

As part of the 2012 fundraiser for our fantasy anthology, Giants of Main Street, we encouraged Cloudscape members to draw their own giants. Here’s what we got.

Back in 2012, we ran the “Monster Alphabet.” where imaginary monster names would be posted, each one for a new letter of the alphabet. Artists would send in pictures about what they think each monster would look like, based on the name, and then our members would vote on the pictures. Here are all the winners, from A to Z.

Umbrella Girl is the Cloudscape mascot and she shows-up in all our anthologies: sometimes on the cover, sometimes hidden on a page inside. Here are various interpretations of the character, illustrated by various Cloudscape members. 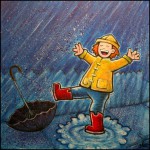 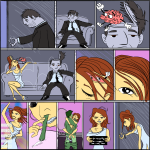 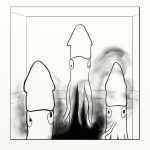