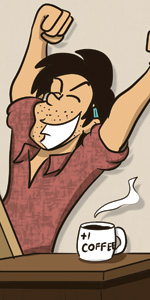 Ed “Mr Jitters” Appleby is a cartoonist and graphic designer based out of Vancouver originally from Lumby, BC. He began publishing work online in 2005 and has been doing comics full time since 2008. Ed puts his prolific amount of comics down to copious amounts of caffeine and small town work ethic, and the idea that you are only as good as your next piece. He is currently working on his twin properties of Ed’s R Us and Betty and the Beast, as well as working as an illustrator for The Other Press. When Ed isn’t drawing, he dabbles in acting, screen writing, 3d modelling and High Seas Piracy.