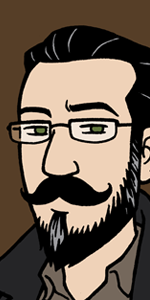 Steve Rolston is an Eisner-Award-winning comic artist whose work includes Queen & Country, Emiko Superstar, Pounded, The Escapists, Degrassi, Ghost Projekt, and Teenage Mutant Ninja Turtles. While he most often works with writers, Steve has gone solo on a few comics such as the cartoony Jack Spade & Tony Two-Fist and his slacker noir graphic novel One Bad Day. Beyond comics, Steve has worked on children’s books, video game character designs, and storyboards for animated cartoons. And since 2005, he has been teaching the art of comic book storytelling at the VanArts school in Vancouver.