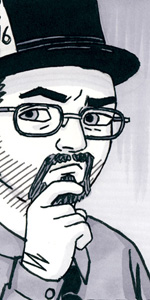 Jonathon lives and works just outside Vancouver, Canada. He makes comics about strange, alien worlds and the ordinary people who live in them. Jonathon’s past works include the self-published graphic novels A Mad Tea-Party and the Xeric-winning Lords of Death and Life. He has also drawn short comics for various Cloudscape anthologies, for Leia Weathington’s The Legend of Bold Riley, and for the anthologies New World and Cautionary Fables and Fairy Tales: Asia Edition. He is currently working on a mysterious new book he has mysteriously described as “shoujo cyberpunk.” What a mystery!