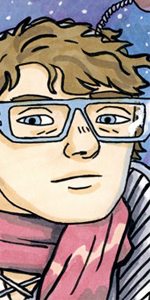 Bevan is heavily involved in Cloudscape on numerous levels, previously serving as the Media Manager and as a frequent editor and writer for various books. Most prominently, he spearheads the Epic Canadiana series of Canadian superhero anthologies. Outside of Cloudscape, Bevan’s comics have also been published in GuruKitty Studios’ trio of comic collections and in the Beyond science fiction anthology. A devotee of storytelling in all its forms, Bevan is available to teach and mentor people in writing and world-building.