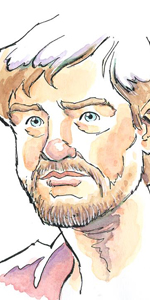 James Lloyd has been drawing in Vancouver for twenty years plus, whether it’s been for local animation companies, the comic biz in LA, or his own independent works and gallery pieces. In 2000 he began penciling the Futurama title for Matt Groening’s Bongo comic company and has been the regular artist on the book ever since. In 2008, the collected Simpsons/ Futurama Crossover Crisis storyline, for which James provided the art, was collected by Abrams Art in a deluxe format and became a bestseller. Recently James has been developing projects for First Second Books and Boom! Comics.