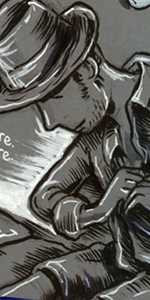 Sean Karemaker is an artist living in Vancouver, BC. After a childhood obsession with reading and writing comics, he obtained a diploma in graphic design from Malaspina University-College in Nanaimo (2002) and began a career in 3D design for video games, while also doing freelance work in graphic design and illustration. Personal narrative is a common element in his body of work, which encompasses diorama sculptures, comics, scrolls, and paintings. Sean’s work has been exhibited at such local art galleries as the Gam, the Gropps, the Seymour, the Pendulum, and the Ayden.