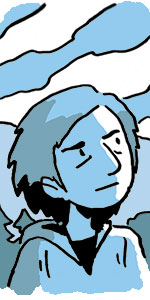 Jason Turner is a Canadian comic book artist currently residing in Vancouver, BC. He has been self-publishing comics since the late 80s, and has been putting his comics on the internet since the late 90s. Jason co-wrote the True Loves trilogy with his wife Manien Bothma. More recent work includes Farm School, The Adulation, Bird Comics, and his new work-in-progress: Fir Valley. His comics column in comic form, Jason and the Comics, ran in Broken Pencil for five years. Jason currently organizes the monthly Vancouver Comic Jam.