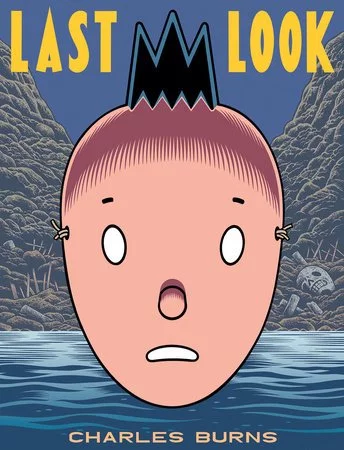 The Last Look Trilogy (X’ed Out, The Hive and Sugar Skull) by Charles Burns follows a series of events and thoughts in the life of a young and somewhat unconventional artist named Doug, including his memories, fears, and ambitions. It is a surreal story in which the reader is taken back and forth between various points of a timeline, and even an alternate dreamworld. Reality and dreams are shown one after the other, and in which time and events are shuffled. As the story progresses, the mystery gradually dissolves, and by the end, all elements come together.

Burns makes several references to Tintin, such as the cover of X’ed Out bearing a striking resemblance to Tintin and the Shooting Star as well as evidence of Doug reading Nitnit comics in some panels. Burns also makes references to other comics, seen especially during the dream sequences in which the characters becomes stylized and drawn differently from the “real world” of the story.

Unlike the immense black and white intensity of Burns’ Black Hole graphic novel, the Last Look trilogy uses colour. However, Burns doesn’t hold back on detail, and there remain many strong and bold shadows. Burns’ approach to characters, especially the facial expressions (such as characters sometimes leaving their mouth open during a snapshot photo), adds a relatable kind of believability to the whole mixture.

All in all, if you’re interested in a surreal experience with timeline hopping and strong visuals, you might enjoy the Last Look trilogy.