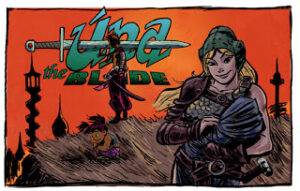 We at Cloudscape are excited to announce the book launch of Una the Blade by Steve Le Couilliard, a swords & sorcery graphic novel of a barbarian single mom struggling to protect her children in a world gone mad.

Cloudscape will be celebrating the Una book launch on:

The event is free and everyone is welcome. Steve will be there selling and signing copies of Una as well as limited edition postcards and original art. Also attending the launch will be numerous other prominent local comic creators, including many Cloudscape members. Visitors will be able to purchase food and drink from the tavern, the Storm Crow’s unique fantasy & sci-fi atmosphere, and hobnob with a wide selection of Vancouver’s diverse comics community. Sign-up to the event’s Facebook page at the Una the Blade Book Launch.

Una the Blade is a dying-earth fantasy adventure in the style of such classic authors as Jack Vance and Clark Ashton Smith. It is the long-gestating brainchild of Steve LeCouilliard, creator of the Xeric Grant-winning Much the Miller’s Son, co-creator and artist of Dreadful Sirens with writer Karla Pacheco, and a 12-year veteran of the animation industry. He is joined in Una by a parade of comic artist greats: Simon Roy, Katie Shanahan, Tess Fowler, Renee Nault, Chris Johnston, Michael Stearns, Claudia Aguirre, and Sloane Leong.