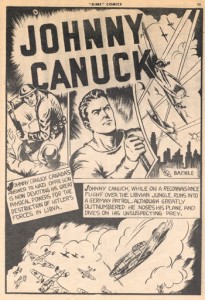 The Golden Age of superhero comics existed from the end of the 1930s to the beginning of the 1950s, with the bulk of it revolving around World War II. Superheroes have never been as popular since. There was something about the second War to End All Wars that made the general population respond to the superhero aesthetic in a way they haven’t done since. While now the superhero comic medium is defined by two monolithic companies (Marvel and DC), in the 40s there were countless companies all coming out with their own characters. Canada even had a viable comic book industry due to a wartime ban on various American imports. This resulted in the genre of comics known as “Canadian Whites” (so-called because they were published in black-and-white) and resulted in the creation of such classic figures as two-fisted military hero Johnny Canuck, bloodthirsty vigilante the Penguin, and powerful goddess Nelvana of the North.

Sadly, virtually all Canada comic companies vanished just after the war, when it became legal to again send American comics north of the 49th parallel.

Though it is a great shame that so many comic book companies vanished after the Golden Age, particularly the Canadian ones, it does mean that a huge percentage of classic comic books are now public domain, and thus can be freely distributed, and their characters adapted into new stories for the new millennium. There is something incredibly exciting about being able to take the greatest Canadian superheroes of World War II and spin new tales for them, creating something grand with the figures who fascinated our young forefathers.

Information on various characters, Canadian Whites and otherwise, can be found at the following websites:

1. International Superheroes: A detailed online encyclopedia of superheroes from all over the world. It includes a large section for Canadian heroes, including most of the Golden Age ones.

2. Public Domain Super Heroes: A wikia cataloging all the heroes in various mediums who have fallen into the public domain, including many Canadian Whites.

While public domain Golden Age comics can be read at these sites:

1. Digital Comic Museum: An extensive and rapidly growing database of Golden Age comics from America, Britain, and Canada that can be downloaded for viewing pleasure.

2. Golden Age Comics: A similar database of downloadable public domain comics. It includes many comics that the other lacks and vise versa.

Also there’s an interesting website that analyzes the development of Canadian superheroes:

Guardians of the North

These sites give a fascinating window into a pivotal period in comic book history and into the development of the Canadian comic, and also conjure forth numerous intriguing characters who would be compelling subjects for modern comic stories. Personally, I’ve got a few things planned for some of them…