Coming later in 2019, Cloudscape will be publishing the definitive version of Steve LeCouilliard’s Robin Hood series Much the Miller’s Son. 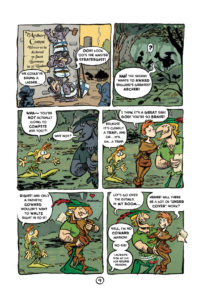 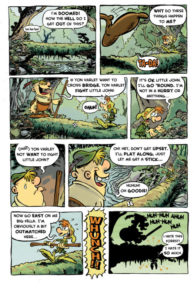 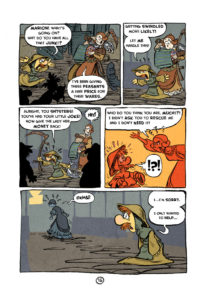 Much the Miller’s Son is a minor character from the original tales of Robin Hood, but in this story he becomes our point of view character. The usual gang is there; Robin, Marion, Friar Tuck, Will Scarlet and Little John, but each with a new and subversive spin on the original. In this comic Steve combines a Bande Dessinee aesthetic with raunchy humour and a revisionist historical sensibility. Much the Miller’s Son is a comedy, with the plot moved along by ridiculous characters working at cross purposes. It is full of visual gags, wacky twists, crude humour and slapstick with a comedy structure that wouldn’t be out of place in Medieval theatre. If Chaucer wrote Bugs Bunny cartoons, they might come out something like Much the Miller’s Son.

Steve began working on Much the Miller’s Son in 2007, and has self-published three volumes over the years, including the Xeric-winning Robin’s Seven. The Doomsday Book will include a brand new chapter as all of the Sheriff’s schemes come to fruition. Steve is currently re-posting the pages as they get coloured on his Tumblr and on Instagram. You can follow along with the misadventures there, and stay tuned there or here for more news as we get ready for a Kickstarter campaign some time in 2019.