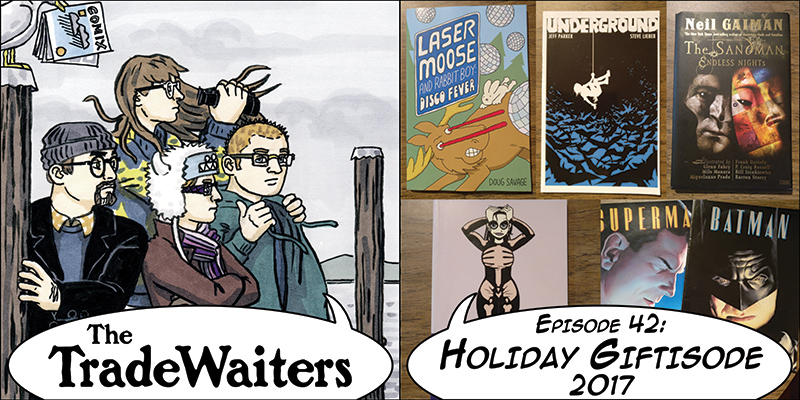 Our TradeWaiters haven’t read a NEW comic this week, but we do have a bunch of OLD comics we’d like to talk about that might be new to you. If you’re looking for a comic to give away this holiday season, or a comic to give to yourself, Jess, Jon, Jam, and Jeff have some carefully selected favourites for every type of comics reader. This episode is unusually spoiler-free, so give it a listen!

Mentioned in this episode:
How Not to Write Comics Criticism by Dylan Meconis
Laser Moose and Rabbit Boy: Disco Fever by Doug Savage
Underground by Jeff Parker and Steve Lieber
Fables written by Bill Willingham
Meanwhile by Jason Shiga
To Be or Not to Be and Romeo and/or Juliet by Ryan North
Persepolis by Marjane Satrapi
Lumberjanes: To the Max Edition by Allen, Ellis, Stevenson, and Watters
Batman: War on Crime and Superman: Peace on Earth by Alex Ross and Paul Dini
Arsene Schrauwen by Olivier Schrauwen
Minus by Ryan Armand
Saga by Brian K. Vaughan and Fiona Staples
Skeleton Key by Andy Watson
The Gorgeous Harbour by Mr. Clement
Letters to an Absent Father by Maré Odomo
A Drifting Life by Yoshihiro Tetsumi
Sandman written by Neil Gaiman
Monsters by Ken Dahl
Age of Bronze by Eric Shanower
The Illiad and The Odyssey by Homer
X-1999 by CLAMP

and Swan Song, our anthology Kickstarting for one more week.

Our next book will be I Killed Hitler by Jason.