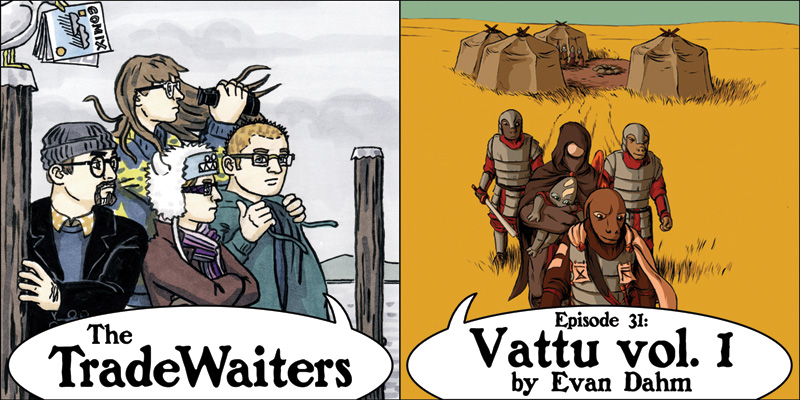 This week on The Tradewaiters, The Fifth TradeWaiter (a.k.a. Jess Pollard) joins us to talk about Vattu: The Name and the Mark by Evan Dahm. This is the first volume in print of Evan’s epic webcomic project. Listen to us chat about how much we love his work, but more importantly, the reasons why we love it and why you should too. We’ve got a lot to say about webcomics in general this episode.

Also mentioned in this episode:
Rice Boy and Order of Tales, also by Evan Dahm, as well as his illustrated editions of The Wizard of Oz by L. Frank Baum and Moby Dick by Herman Melville.
Questionable Content by Jeph Jacques
Scary Go Round, Bobbins, and Bad Machinery by John Allison
XKCD by Randall Munroe
Dinosaur Comics by Ryan North
Neopets comics
Sluggy Freelance by Pete Abrams
Reinventing Comics by Scott McCloud
Mega Tokyo by Fred Gallagher and Rodney Caston
Shadoweyes by Sophie Campbell
Barbarous by Ananth Hirsch and Yuko Ota
Band Versus Band by Kathleen Jacques
Margaret by Matthew Seely
and The Dregs by Zac Thompson, Lonnie Nadler, and Eric Zawadzki

And our own projects:
Phobos and Deimos by Jonathon Dalton
Crossroads by Jeff Ellis
Lunar Maladies by kgros
Wasted Talent by Angela Melick, and
Liquid Shell by Jess Pollard.

Our next episode will cover volumes one and two of Your Lie in April by Naoshi Arakawa.