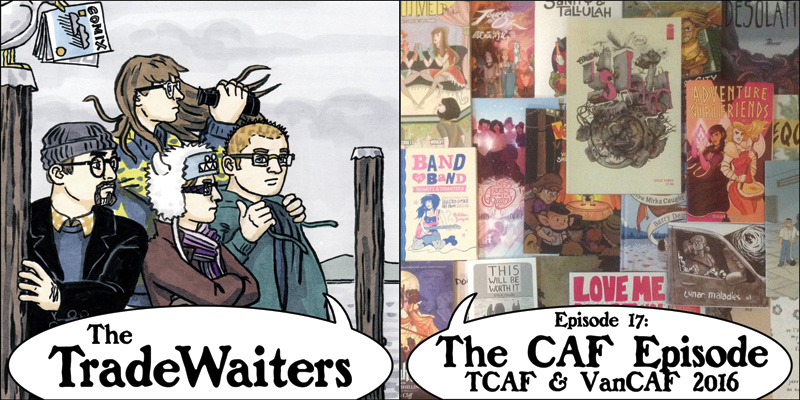 Episode 17 is our “CAF” episode! Join Jon, Jeff, Kathleen, Angela, and special guest Sfé R. Monster as they share some of the best new comics they found at TCAF and VanCAF 2016.

In this episode our panelists talk about:
When You Grow Up by Ma’at Crook
My Sister’s Voice by Alexis Sugden
Clear Quartz by Joamette Gil
(Tr)Eat Yoself by Wai Khan
Before the Snows Come by Kat Verhoeven
Fear and Loathing in Las Vegas by Hunter S. Thompson & Troy Little
Friends and Food Stories by Joslin Chan, Roberta Chang, and Sylvia Chan
Desolation by Jade McGilvray
Journey to Oz by Arianna Mao
Four Fables by Maëlle Doliveux
Sky Gods by Leda Zawacki
Don’t Talk to Me or I’ll Set Myself on Fire by Jane Mai & An Nguyen
Hotel Positano by Levi Hastings
Agents of the Realm by Mildred Louis
Sad Boy Comix by Mike Dawson
Version 002 by Jake Wyatt
Late Bloomer by Maré Odomo
Twins by Kiku Hughes
The Nameless City by Faith Erin Hicks
Escargoteric by Johnny Herber

Our next book will be Dykes to Watch Out For by Alison Bechdel.

You can also follow the TradeWaiters on Tumblr and Soundcloud, and we now have a Twitter feed as well.