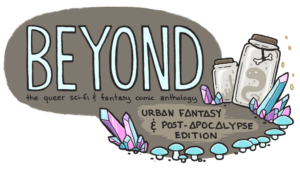 Beyond was an anthology of queer-themed speculative fiction comics published in 2015 to wide acclaim, featuring a wide variety of stories starring LGBT characters on numerous worlds. Now Beyond 2 has been announced. The editors are interested in original urban fantasy and post-apocalyptic stories exploring, expressing, and including queer, trans, and genderqueer themes and characters. Adventures set in and around the end of the world, and hijinks surrounding city magic.
Submissions for story pitches (not completed scripts) will be open until April 5th. The anthology will pay $50/completed page. For more information, visit the Beyond 2 submissions.